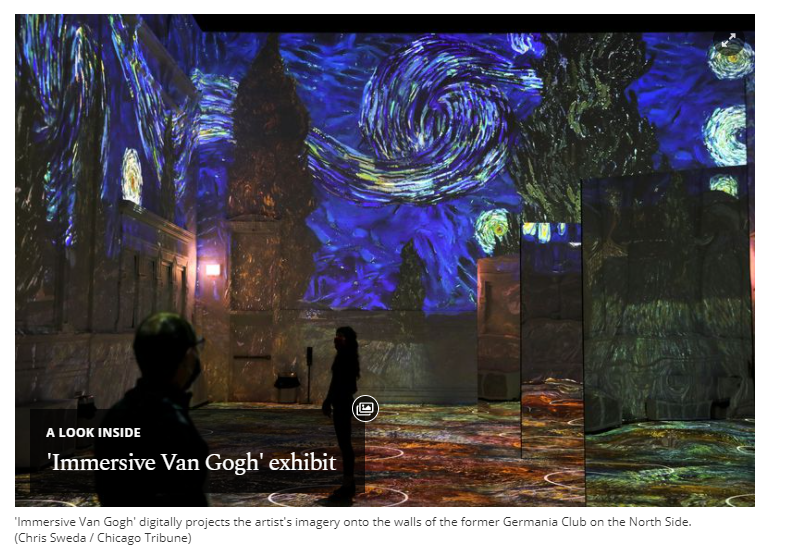 When Vincent Van Gogh cut off his left ear with a razor as part of a general mental health decline in his final years, one of the things he was despondent about was the feeling that his paintings were not appreciated.

Jump forward almost a century and a half, and he is one of the planet’s best-known and most celebrated artists. The latest manifestation of western culture’s long-running Van Gogh mania is “Immersive Van Gogh,” a super-trippy digital projection of the artist’s imagery onto the walls and floors of the grand halls of a North Side former social club.

Taking up residence beginning Thursday for at least the next handful of months, and sold out through March even at the not-bashful price of some $50 a ticket, it’s billed as an “exhibit.” But that implies a certain movement through space by viewers as they nod sagely at things on a wall.

Here, the entirety of the rooms pulse with imagery, a light-and-video artist’s rendering of Van Gogh’s thick paint daubs, his fuzzy distant stars and exuberant, hopeful sunflowers, as a kind of living wallpaper. Cicadas buzz, water ripples, and backing songs by the likes of Edith Piaf and Thom Yorke (Radiohead) lend it a certain emotional resonance.

The viewer stands in the room, soaking in the sights and the soundtrack of what is really more short film than exhibit, 40 or so minutes of Vincentian near-psychedelia. It’s an updated version of the 1970s Pink Floyd laser light shows projected onto planetarium ceilings late on weekend nights for audiences of dubious sobriety. 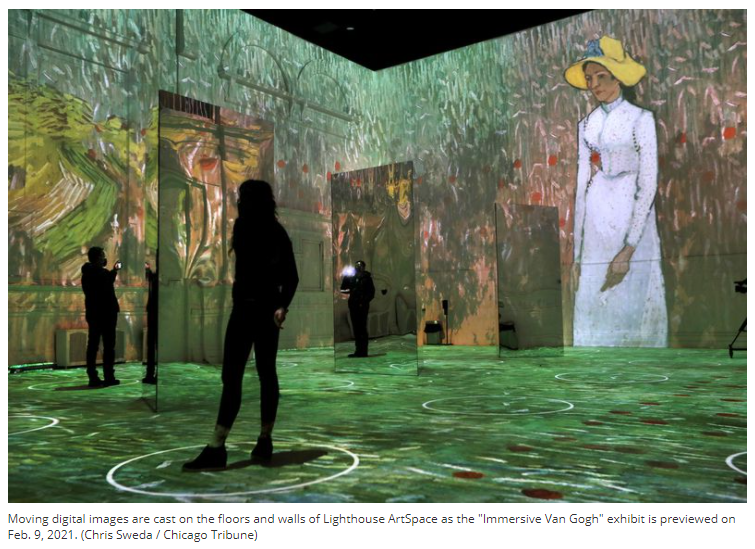 But instead of the borderline skeezy rock culture undertones of a Floyd show, making it about an artist — the very guy whose vivid little rectangles you pay to stand in front of with silent reverence at the Art Institute — puts a veneer of high culture on the whole thing. Tonight’s head trip is being sponsored by your college’s core curriculum requirement in humanities and the arts.

And if you were to think, prior to your Van Gogh immersion, about where the nearest dispensary might be, you would surely not be alone.

If you were to think about “Emily in Paris” while seeing this you would not be alone either. The virtually laugh-free Golden Globe nominee for best 2020 comedy had its title character visit the Van Gogh light show that this derives from, part of her dutiful mission to reduce the French capital to Instagram moments.

The Toronto firm Lighthouse Immersive hired Italian light designer Massimiliano Siccardi, whose “Van Gogh, Starry Night” inspired Emily to take yet another selfie and has been a hit with Parisian audiences.

Even as it opened during the COVID-19 pandemic — more on that in Chicago in a moment — “Immersive Van Gogh” has apparently done very well in Toronto. It is set in the former Toronto Star printing plant, which allowed initial audiences to drive right in, bringing the van to Van Gogh, as it were.

Still the announcement in November that it would be coming here came as something of a surprise both because of COVID and also because a traditional Midwestern art museum, the Indianapolis Museum of Art, had recently said that it would be presenting its own Van Gogh light-projection show.

That museum, beginning in June, will offer as a permanent exhibition, The Lume Indianapolis, 30,000 square feet of its galleries transformed into space for digitally projecting art, with Van Gogh imagery from a different producer slated as the initial offering. The old-line Indy museum is going all in on what Artnet News calls “the growing genre of art-themed immersive installations and how deeply they seem to be resonating with audiences.”

What’s intriguing about these and less high-minded, non-traditional, Instagram friendly “museums” — think Chicago’s Wndr Museum and New York’s Museum of Ice Cream — is that they seem to be developing new audiences for art experiences rather than cannibalizing traditional ones.

There may come a saturation point, but the apparently robust ticket sales for “Immersive Van Gogh” suggest we are not nearly there yet.

The show is debuting, of course, in a state where COVID-19 case trends are improving but are still at higher levels than during the early months of the pandemic. 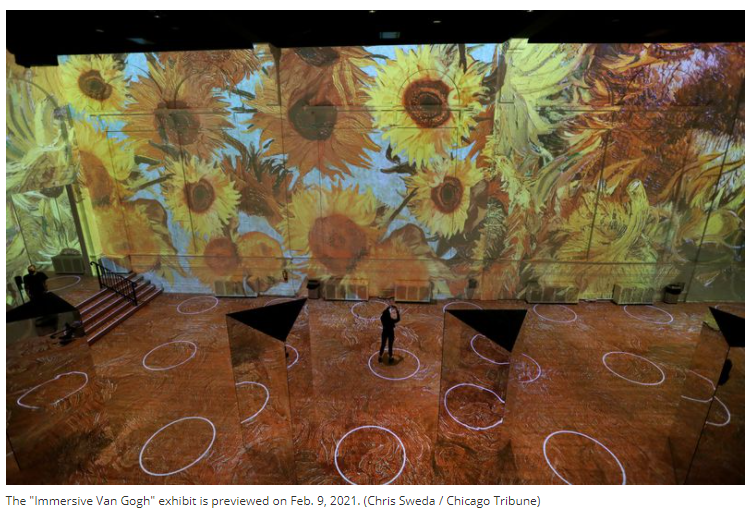 But in the awkward back-and-forth dance of society’s response, the state is opening back up. Restaurants are being allowed to seat some diners indoors again, and museums — probably the closest analog to the show space’s big, high-ceilinged rooms — are opening back up.

Limited capacity and mandatory masking are the rule at museums, and so it is with “Immersive Van Gogh.” An exhibit that would have had a capacity of 300 in “normal” times is limiting ticket sales to 80 per presentation, a publicist said, and throughout the four rooms, the digital projections include socially distanced circles on the floor meant to keep patrons from clustering.

It is located in the former Germania Club building (108 W. Germania Pl.) redubbed Lighthouse ArtSpace Chicago, and for now is slated to run through early September, with other light-projection presentations expected to follow.

The neo-classical space is welcoming, with a wide staircase guiding you past the gift shop/cafe at the mezzanine level and up to the second-story ballroom level. The biggest room has 35-foot-high walls, with a second, also grand hall and then two smaller but still fairly voluminous rooms that connect them.

How that will feel to you depends on your sensitivity level. I’m on the cautious side, avoiding even grocery stores for the most part, and being in an “IVG” preview showing this week with about 30 people in the rooms, mostly show staff getting things ready for the Thursday opening, felt fine.

But I didn’t have to wait in line as producers flip the audiences for hourly showings, either. Under those near-ideal preview circumstances, instead of thinking about my health, I was able to concentrate on the sound, the lights, the imagery.

There’s even a whiff of a narrative through the show, more so if you know what Van Gogh works are being excerpted and where they fall in his career. (Not to assign homework, but a little advance reading would help.) 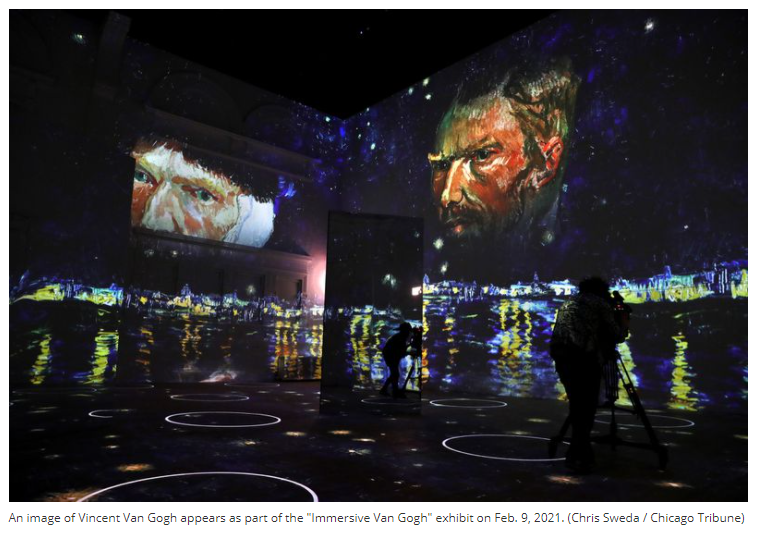 This is not a biography of the artist, slapping quotes on the walls at every opportunity, but it does break down into pretty clear visual chapters, including his Parisian and his Arles tenures, his time in an asylum, his connection with common people as his subjects and the freedom he seemed to find in nature canvases, like the glorious sunflowers and irises.

The presentation by Siccardi and his partners takes as its cue the Van Gogh quote, “I dream my painting and I paint my dream.” It tries to suggest the artist’s state of mind through the various phases of his career, and even puts us into the act of creating some of the paintings.

It’s all surmise, of course, but it is effective to see the celebrated “Bedroom at Arles” — subject of an Art Institute blockbuster five years ago — emerge from a black-and-white line drawing of a bed.

Clever touches like that — boots moving through a field, those cicadas buzzing on the walls — keep this from being a mere slide show or backdrop for whatever photographs you might take with your phone. It’s not the same as seeing an actual Van Gogh canvas, but it is pretty impressive at starting a kind of dialogue with them.